The ICS Medal is awarded to Peter Sadler of the University of California-Riverside for his ground-breaking contribution to stratigraphy, naming developing and applying the CONOP software program. Peter Sadler has a long, substantial history of contributions to stratigraphy. After training as a conodont biostratigrapher, Peter Sadler in the 1980s extended his interests to the completeness of the stratigraphic record with fundamental insights based on a wealth of data with the resulting publications widely cited. In the early 1990s, he addressed carbonate cycles and Fischer plots. And in the 21st Century, he developed the CONOP software program for compiling biostratigraphic ranges into synthetic range charts into which other stratigraphic signals and numerical ages could be precisely correlated. Working with Roger Cooper, CONOP was applied to graptolite biostratigraphy with amazing results. Overlapping ranges of species were compiled from numerous sections worldwide, and these, in turn, served to assess correlations and to produce high-resolution timescales, particularly for the early Paleozoic. Furthermore, they provide amazing insights into faunal dynamics. Peter Sadler was selected as the William Smith Lecturer for 2012 by the Geological Society of London, demonstrating the high regard for his scientific contributions by peers worldwide. 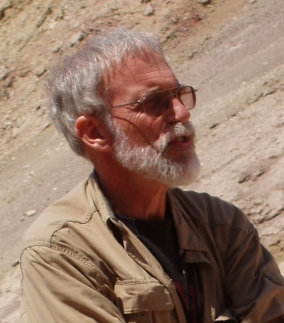 Caption for Photo: Peter Sadler in the field